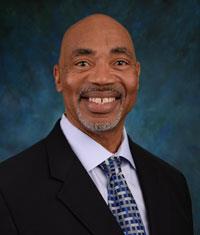 Dr. John Ogletree Jr. has served on the CFISD Board of Trustees since 2004 and was re-elected to his fifth term in November 2017. A 27-year resident of CFISD, Dr. Ogletree lives in the Copper Lakes Estates subdivision with his wife, Evelyn. All four of his children, Johnny, Lambreni, Joseph and Jordan, graduated from CFISD schools.

Dr. Ogletree is the pastor and founder of First Metropolitan Church. He has served in various roles on the Board, including member, Secretary, Vice President and President. Prior to his election, he served on several district task forces while his wife worked as a teacher and elementary counselor in CFISD.

His involvement in other community organizations includes being a member of the Cy-Fair Houston Chamber of Commerce; 2nd Vice President of the Baptist General Convention of Texas (BGCT); past moderator of the Union Baptist Association of Houston; commissioner for Christian Live Commission of the BGCT; and advisor to Mission Houston.