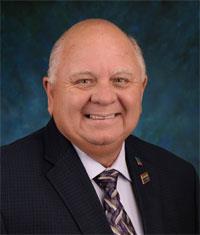 Bob Covey has served on the CFISD Board of Trustees since 2005 and was re-elected to his fourth complete term in November 2017. A 44-year resident of CFISD, Mr. Covey resides in the Lakes of Fairhaven subdivision with his wife, Kathleen. His three children (David, Michael and James) are all CFISD graduates, and Mr. Covey’s five grandchildren attend CFISD schools.

Mr. Covey retired from American Alloy Steel, Inc., as vice president of sales after 35 years, and works for the company in a support role post-retirement. He is a CFISD Global Volunteer and a regular reader at Sheridan and Metcalf elementary schools. He regularly participates in the CFISD Bus Buddies program and Read Across America.

Prior to serving on the Board, Mr. Covey was part of the Long-Range Planning Committees that helped form recommendations for the 2001 and 2004 Bond referendums. He is a member of the Cy-Fair Houston Chamber of Commerce and the Christ the Redeemer Catholic Church Knights of Columbus.

Mr. Covey has served in multiple capacities on the Board, including member, Secretary, Vice President and President. He participated on the Texas Association of School Boards (TASB) Board of Directors and Legislative Review Committee and is a Master Trustee through Leadership TASB. A member of the Gulf Coast Area School Board and a Texas Fellow, Mr. Covey is president of Go Public Gulf Coast and a Make Education a Priority ambassador. An alumnus of Texas State University, Mr. Covey regularly lectures at the TSU College of Education and helps recruit teachers for CFISD.